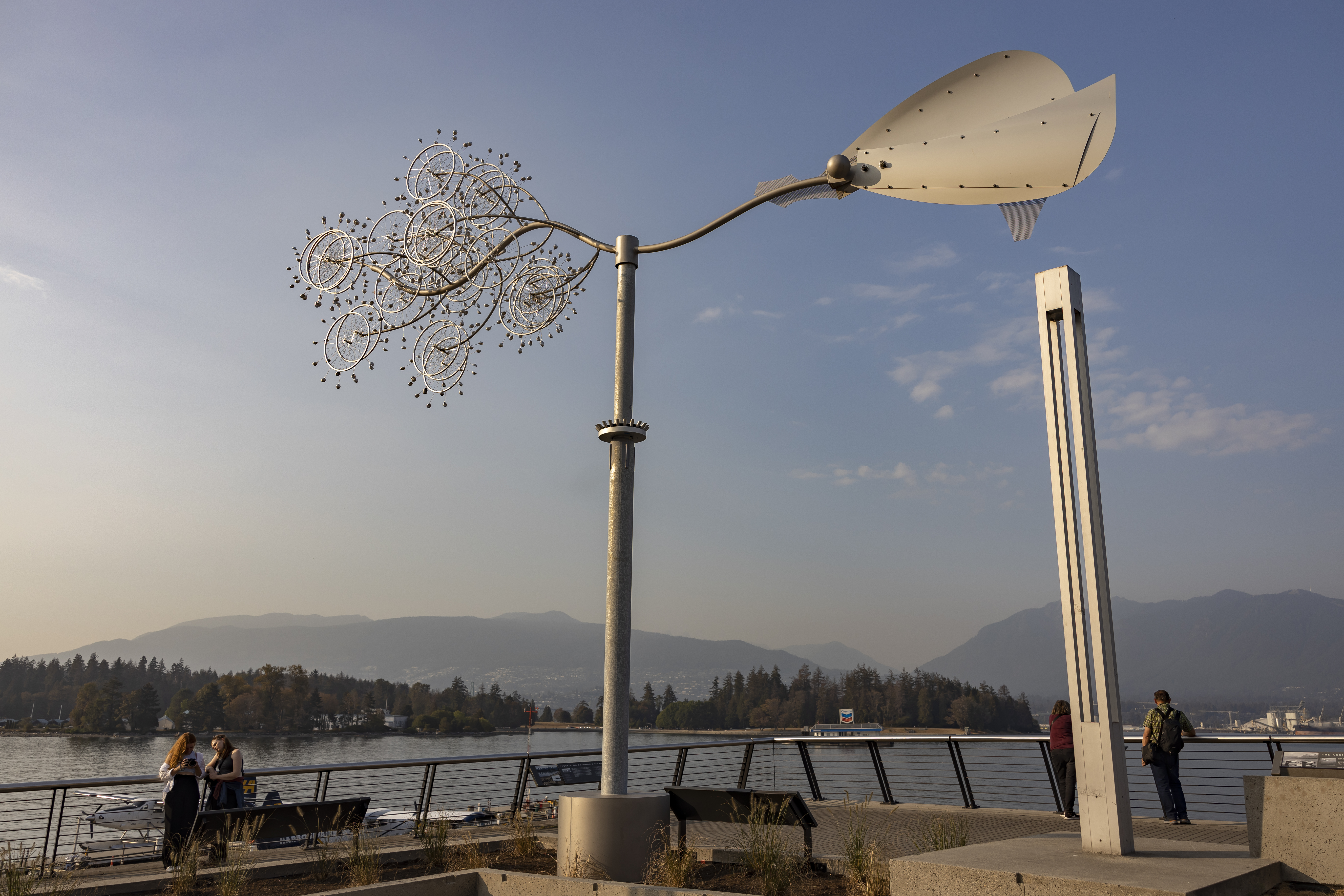 September 22, 2022 (Vancouver, BC) – Officially dedicated today, the BC Labour Heritage Centre’s Asbestos Memorial is the first public memorial in North America that honours the thousands of victims who have died or been impacted by asbestos exposure.

Located on the northwest corner of the waterfront path of the Vancouver Convention Centre, the seven-metre-tall sculpture, titled “Magic and Lethal”, faces the Burrard Inlet, where asbestos was loaded into export ships for decades.

“At the height of its production, asbestos was called the ‘magic mineral’,” said Joey Hartman, Chair of the BC Labour Heritage Centre. “On behalf of the BC Labour Heritage Centre, we are thrilled to present the new asbestos memorial to the community and hope it will spark awareness and conversations. We are grateful to the Province of B.C., WorkSafeBC, the Asbestos Related Research, Education and Advocacy Fund, the BC Pavilion Corporation (PavCo), the Vancouver Convention Centre, and all of our donors for their ongoing support.”

The memorial was designed by celebrated Vancouver artist Doug Taylor in the style of a mobile, with wheels that spin with the wind to create a mesmerizing visual.

“Activated by the wind, the weathervane responds to the slightest change in direction from the breeze”, said Doug Taylor. “The spokes and wheels resemble the needle-like fibres and molecules of asbestos. Together the entire metalwork evokes a visual connection to the lungs and bronchial airways of the human body.”

Asbestos is a naturally occurring fibrous mineral commonly used in building materials before the 1990s. Its resistance to heat, electricity and corrosion made it attractive for construction, especially as an effective insulator. However, when asbestos is disturbed, its fibres become airborne and can cause serious health concerns if inhaled or ingested. In Canada, asbestos mining ceased in 2011, and asbestos-containing materials were banned in 2018.

Magic and Lethal is just one of the BC Labour Heritage Centre’s many projects that aim to preserve, document and present the rich history of working people in British Columbia. Other initiatives include educational plaques along the Vancouver Convention Centre’s seawall, which serve as anchors to the Vancouver Labour History Walking Tour.

“Asbestos continues to be the leading cause of work-related deaths in B.C.,” said Anne Naser, President and CEO of WorkSafeBC. “We are proud to support The Asbestos Memorial not only to honour those who have died from past exposures, but also to raise awareness about the risks still prevalent in our workplaces today. WorkSafeBC continues to prioritize consultation, education, and enforcement initiatives aimed at reducing asbestos exposure in B.C.”

“The BC Pavilion Corporation (PavCo) and the Vancouver Convention Centre are pleased to welcome the new asbestos memorial on its waterfront pathway as part of our ongoing partnership with the BC Labour Heritage Centre,” said Craig Lehto, general manager for the Vancouver Convention Centre. “With its unique, dynamic design, the asbestos memorial will capture the attention and imagination of pedestrians, inviting them to take a moment and reflect on the legacy and impact of B.C.’s workers.”