i
Home › About Us › Our Story › Olympic Legacy

With state-of-the-art technology built into the facility’s infrastructure, we were able to fulfill even the most complex requirements of the world’s media. Approximately 3.5 billion people watched the Olympics through our windows and thousands more have experienced our world-class facility first-hand.

Thousands upon thousands came to see the majestic Cauldron lit during the 2010 Winter Games. And with the Games now complete, it remains as a permanent landmark on Jack Poole Plaza.

At 32.8 ft (10 m) tall and set against a beautiful mountain and harbour backdrop, the Cauldron continues to attract visitors and locals alike. More importantly, it’s a reminder of our city’s extraordinary Olympic experience and demonstrated ability to host large, complex, international events.

The Cauldron was provided by FortisBC through a legacy investment and partnership with the Vancouver Olympic and Paralympic Organizing Committees.

The Vancouver Convention Centre is home to an Olympic Legacy Display located in the Harbour Concourse connecting our East and West buildings. The display includes a full set of Olympic and Paralympic medals and torches from the 2010 Games, kindly provided by the International Olympic Committee. It also features interpretive panels and a medal podium, accessible to our delegates, visitors and the local community for viewing and photo opportunities. 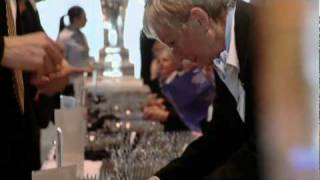 View the Event of a Lifetime

We are here to help you every step of the way.