From the moment they landed at Vancouver International Airport (YVR), attendees were treated to a number of “surprises and delights” organized by the local host committee lead by Tourism Vancouver and the Vancouver Convention Centre with tremendous support from local partners, such as YVR’s control tower lit with PCMA colours; yoga sessions and morning runs along the city’s most scenic routes; a bespoke “PCMA Caesar” cocktail served at host hotels; and opening and closing receptions that many attendees cited as the best they had ever attended. The conference also left its legacy in Vancouver through a social responsibility initiative that involved 150 delegates sprucing up two local at-risk daycares.

Convening Leaders contributed an estimated $6.2 million in direct spending to the B.C. economy and represents millions of dollars of potential future meetings business for Vancouver.

About the Vancouver Convention Centre

Located on Vancouver’s downtown waterfront with a dramatic mountain backdrop, the world’s first LEED® Platinum certified convention centre offers one of the most beautiful settings in the world. The award-winning Vancouver Convention Centre features two connected buildings with a combined total of 466,500 ft2 (43,340 m2) of flexible meeting, exhibition, ballroom and plenary space. The facility is committed to environmental sustainability as well as unparalleled service, technology offerings and culinary excellence. 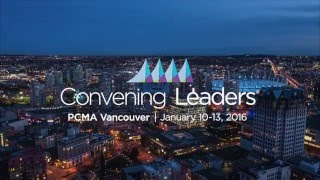